Centrally located on Manitoulin Island within the Great Lakes Region of Northern Ontario, Canada, the heart of the community is located within the  bay surrounded by the North Channel of Lake Huron.The First Nation formerly known as West Bay, proudly changed the name of the community to M’Chigeeng (Pronounced Shi-geeng).

The second largest First Nation on Manitoulin Island was settled in the middle of the 19th century when many Anishinabek from the north shore area relocated.  M’Chigeeng is now home to the Anishinabek of the Three Fires Confederacy: Odawa, Ojibway and the Pottawattomi Nations. The total Registered Population of M’Chigeeng First Nation 2,543 – (Source: INAC) 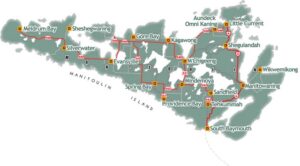